Moving up the coast, we had lunch at Eel River Brewing Company  (http://www.tripadvisor.com/ShowUserReviews-g32404-d1175995-r138129186-Eel_River_Brewing_Company-Fortuna_California.html)) and then checked out the City of Ferndale. We’ve wondered how some places get the honor of being on the “Ten Best Small Towns in America” list because we’re usually disappointed. Not this time. Sometimes referred to as “Cream City” because of the well-preserved Victorian store-fronts and homes (also known as “Butterfat Palaces,” due to their construction during a period when a great deal of wealth stemmed from the dairy industry), the entire town is an historical landmark. Home to not only horse racing, but kinetic sculpture racing and the Humboldt County Fair, it’s a place to which we’d definitely return.

We journeyed on to Eureka, where we were slightly unnerved by the ubiquitous presence of storefront signs warning that the masonry building may not be safe in the event of an earthquake, but were soon calmed when just outside of Orick, we happened upon the Roosevelt Elk Herd, which allowed us to get almost close enough to touch. 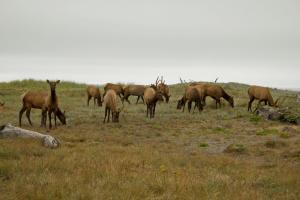 Not long after we passed through Crescent City, the city sadly hit by a tidal wave from the April 2011 Fukushima earthquake. On this cool and cloudy afternoon, we found sea lions happily at play, filling the air with their characteristic barking sounds.

Through Jedediah Smith Forest we viewed more redwoods and finally reach the long day’s destination: Grants Pass. Once again the animal world greeted us, with not nearly so large a presence as the elk, nor loud as the sea lions. Still, Frampton was impressed. 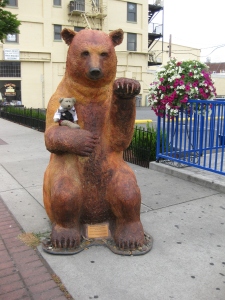 Brooklyn-born Tricia Pimental moved to Portugal in 2012, where she found rural life so idyllic she wrote a piece for the Living the Dream section of International Living Magazine. Today she serves as their Portugal Correspondent. The former actress and Toastmaster has written three award-winning books: Rabbit Trail: How a Former Playboy Bunny Found Her Way, Slippery Slopes, and A Movable Marriage. Other writing credits include two travel books for International Living: The Old-World Charms of Portugal and Escape to Portugal, and a 15-part video series entitled Portugal 101. Tricia has discovered one of the best parts about living in Europe is the ability to sample the culture (especially all that food and beverage) of many countries via road trips. She and her husband Keith—and their intrepid Maltese, Carson—have traveled through Spain, France, Germany, Austria, Switzerland, Liechtenstein, Denmark, and more, as well as Ireland, Eastern Europe, Russia, and the Baltic States. After renting in various regions of the country, Tricia and Keith now own a quinta in central Portugal. She blogs at www.triciapimental.com.
View all posts by Tricia Pimental →
This entry was posted in Travel Junkie. Bookmark the permalink.

2 Responses to Taking Refuge in Wildlife